Pansy wrote back and Alice was thrilled!!

I truly wanted to find a picture of the house where Alice lived for some of these first letters. With some help from a friend with access to Ancestry.com (thanks Diana!) I got the address and unfortunately  found it is now an overpass of the San Diego Freeway -very unromantic, I know. It was a lovely neighborhood with houses similar to the one in the picture below.

I also found out that our Alice was no stranger to scandal – but that’s an epilogue to our saga and a ways off yet.

Here is the 2nd letter in the tin ~ Enjoy!!
Xoxo,
Girlie

Honey boy! Don’t think for a moment I have forgotten you because I didn’t answer directly; But I was so terribly busy; I didn’t find time to write in answer to any of my letters need. So tonight I simply told my self that I am treating my dearest real cruel, by neglecting to answer his letter. So I am down to it, and by and try and make it interesting and as long as I can, to make up for all my “mean-ness”. Perhaps I’ll surprise you when you hear that I am very busy at short-hand and type writing. I have been studying some time at this course, and find it very interesting. Now didn’t I surprise you some?

Dear, I decided that on writing on such a large sheet of paper, I’d better write on both sides as it is so big. I’ll have a hard time finding an envelope to enclose it.

You disappointed me quite a bit when you wrote of your delay in coming West-but I was quite encouraged after reading further. That you’re coming will be no great length of time to wait. For, honey, I can’t wait.  I am awfully blue tonight, and just feel like crying when I think of the awful distance. (??) no. Tell me you are coming soon. Let me say that California, especially San Francisco is a fine place for the drug business, in fact anything connected with that is live –Doctors, or druggists in general. So love, you come to me soon, and then I shall decide whether we shall go (?) or not directly – Ha! Ha!

Do you believe in Fortune Tellers or rather what they tell?

Say, I have oh! So much to tell you – that I can’t begin to note it. And things I wish to give you that would be impossible to write –Ha! Ha!

Dear, I want to make you happy and you know I can do it. To make you who are alone in this world from relatives. – Happy! –

Say you are coming! Every thing will prove most successful here for you I know. This is a country where hopes are made brighter and prospects good. Rely on what I say dear, for I know. For a fact that what I say concerning business and prospects –in general are good.

First of all you of course are coming to my house. We have a beautiful home, big garden, and plenty of extra room. Your coming would over joy me.

Dear, what’s keeping you back? Tell me, why you delay so long? But again I may prone a little bit too curious. Am I? “Love is always curious” Haven’t you heard the expression?

Dear, I must close –am getting terribly sleepy now. My sister is making a great noise in the parlor with her “best” who has been with us a week. Coming 7 & 13 miles to see “her” or the “country” I believe. He is from San Francisco, an English man recently from London. So we have to (?) a good time while it lasts.

With loads of love from your (own little girl),
Alice
Posted by girlie girl vintage at 4:24 PM 1 comment:

This is the first installment  of the “Biscuit Tin” letters.  The letters start in 1908 and continue sporadically for several years. They were written by Alice –a young lady of some means – she travels, attends school and had been East previously – this is where she apparently met Mr. McDonough, whom she calls “Pansy” in many letters.  Pansy worked at Whitchens Drug Co. (I believe it was a drug store) in Woburn, MA.  All the letters in the box were sent to him at the drug store address.

As time permits I am trying to find out more about our Alice and Pansy from local historical societies and will share what I can find with you as I post the letters.  So our saga begins below as Alice writes to Pansy after ~ well just read on... 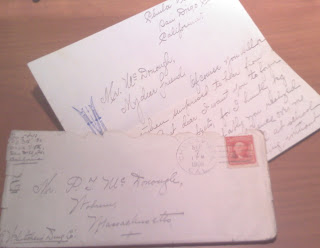 Of course you will be more than surprised to hear from me. But, dear, I want you to forgive me, in all respects, for I humbly beg forgiveness of you.  Probably you realized that others had a greater influence over me and while I was there and at school I could hardly do anything, without consulting my Uncle or other relatives. The last letter I wrote you was written against my will; and I cried, because I was copying a letter written by my Uncle for you. It was all like a dream to me. But, now, I am free to do any thing, as I am going on nineteen now, and of course I am allowed to do as I please.

But, now I will close this ‘mean’ subject with the ardent hope of receiving your forgiveness in your answer to this.

My dear, let me tell you, that thoughts of various sorts, were placed before me; if I did not copy and send that last letter to you.  And I beg you will burn it up – please?
Your gift you sent to me; through the kindness of Mr. MacDonald was greatly appreciated and I opened it more than once when I was alone in my room and looked tenderly into the face of the kind and thoughtful giver.

Well, I sighed, after I had finished that last tear-stained note to you dictated by another. I will, someday, when I am free to write as I wish; I will write and ask his forgiveness.

But the horrid thought appeared quite often in my mind since I left the East June 7, 1907 –that he will never notice the over ‘bored letter girl’ he knew. Convince me that me thoughts were and are full of nonsense.

You remember the night I bought up the ‘maid’ – just so she would not say we were out walking. And I bribed everybody, every time I did any thing. Maybe its quite useless for me to relate these past occurrences, for I think you realize how “closely guarded” I was situated, and, dear, I thought too much to part with any of those very sincere gifts you presented me.

But as I have already stated threats to the “poor little sixteen” year baby, or your gift – and then I sent your gift back, through fear!

I beg you will keep this a secret from my relatives there. By this I mean that probably you might say, (unconsciously thinking that “talk” might be aroused by them) something about having hear from me.

But there is one other that I can trust you telling him, and that is Mr. MacDonald (the ticket agent). I think and have always thought him a perfect gentleman, and one with you, of whom I could trust and confide. And I wish If You Care to have him hear this letter or parts of it. To let him know that I haven’t forgotten you, your dear thought of presenting gifts and other things similar. Now even of course I knew no other as well as you two, while I was in Woburn.

I studied very hard while at school. And took in New York City, before starting for Calif. Perhaps you remember of my speaking of my cousins, Harry Wood and Ada, - well, Ada married the January I was there and moved to (???). So we stopped over a day or two with her. Breaking the monotony of the trip.

I have had just the finest kind of times while here and I have met just loads of people – fellows and girls. Still I hear from quite a few in the East. Some of Yale College and NY City -but none of Woburn. So let you be one of the “dearest friends” who writes from Woburn. And let it be a long, long one to. Enclosing the gold locket (if you still wear it) for I hated to give it up, when I did.

Last summer I arrived from the East. Mon(?), Ellen and I spent these weeks in Los Angeles and had a gay time. This summer we spent a few weeks at a beautiful resort La Jolla and at the wonderful beach resort Coronado and (??) City.  (??) closes for the winter tomorrow but I have spent some dandy times over there.
Went autoing nearly ever other day and covered hundred of miles of “INTERESTING” places and scenery.

Well, dear, if you are sensible and nice it won’t be hard for you to see through all I had to put up with and how all occurred. Tell Mr. MacDonald to drop me a card if he cares to as I would really appreciate it. Perhaps this letter will cheer you –and again it might prove  just the opposite.

But dear I did love you. I do now but so many are in the way that I could express my self better after hearing your decisions.

Letters in a Biscut Box 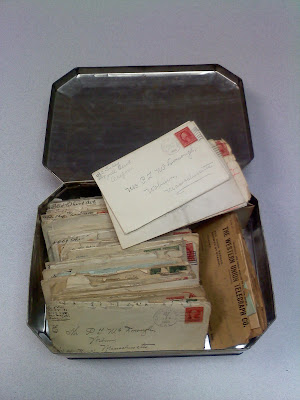 This vintage tin (Huntley & Palmer's Assorted Biscuits) was in a bag of "curb-side" finds from a house being cleaned out.  It was in with piles and piles of Irish lace and linens - all carefully saved for decades then tossed by the relations cleaning the house for sale.  Of course I asked if it was OK to pick them - and once I got the, "Sure, help yourself", in the truck went the bags!

Once I had sorted through all the bags (wonderful stuff!) I went back to the tin, which I had set aside, to read through the letters - and read I did!  Seems I had a bit more than just your average old letters and telegrams from the early 1900's.

My biscuit tin contained an love affair!  A pretty torrid affair by early 19oo's standards I imagine - he was single and from a well known family in the city, she was married and it seems of very questionable character and then.......well I won't give it all away now, you'll just have to check back!

When I originally read them, pre-blogs and the like, I saved them not knowing exactly how I could share this story, until now.  I am finally undertaking the tedious process of  transcribing the letters and putting them in chronological order and will be posting the story here as I go along.